Sad to see ZEBRA over, and many thanks to Thomas Zandegiacomo and the team for all their hard work. We were given a multitude of richly varied (German and British) poetry films: classic examples of the craft in Tim Webb’s 15th February (poet Peter Reading) and Adele Myers’ and Ra Page’s Racing Time (poet Chris Woods). Bowled over by the 14-minute, animation tour de force – Four Acts for Syria directed by Kevork Mourad and Waref Abu Quba with poem by Raed Wahesh, which deservedly won the Best Film for Tolerance Prize. ‘A Message of Peace and Hope for the Syrian People’. Good to listen to the well-received British poetry section and also hear from leading German poet and musical performer Ulrike Almut Sandig. For the British ‘State of the Art’ section with Helen Dewbery, Chaucer Cameron and Lucy English selection here, I chose to present on three pairs of films comparing ‘Unseen Forces and the Protagonist’s Point of View’ – see essay. 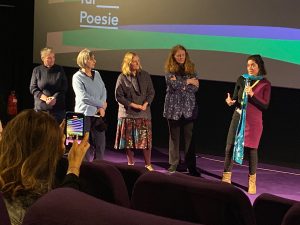 With Chaucer Cameron beginning by presenting Wild Whispers I presented in the schools and student workshop colloquium. I discussed workshops I had project managed since 2013, and led by ecopoet Helen Moore and multi-talented filmmaker Howard Vause. Three films were screened: including poetry films based on ‘Mametz Wood’ by Owen Sheers from sixth form students at St Gregory’s Catholic College, Bath; Midsomer Norton and Bath Dance College dance poetry film project; and Butterflies Haven poetry films from autistic teenagers. I was pleased to share my experiences which were well received, creating further discussion. It was also really interesting to hear how different highly talented academics/poets/filmmakers: Anna Anders, Sophie Maintigneux and Tim Webb worked with their students. Accomplished host Claudia Maass asked interesting and pertinent questions, including  what would be our one wish – mine was, of course, better funding! But also, a wider understanding of poetry film and its benefits within community infrastructures. Leading cinematographer Sophie gave me a handshake after presenting, so the hard work has all been worth it!

Giving space to new voices continued with Nicole May (behind the Manchester-based group Young Identity) who also ran a slam workshop on the Friday morning. The compelling documentary ‘We Are Poets’ (five years in the making) following six inner city teenagers from Leeds as they compete in a leading USA-based Poetry Slam competition, completed the picture. Overall, a great and also humbling experience. Not to forget much dancing at the end party to techno klezmer and speeded up covers – definitely the way to go for all festivals!